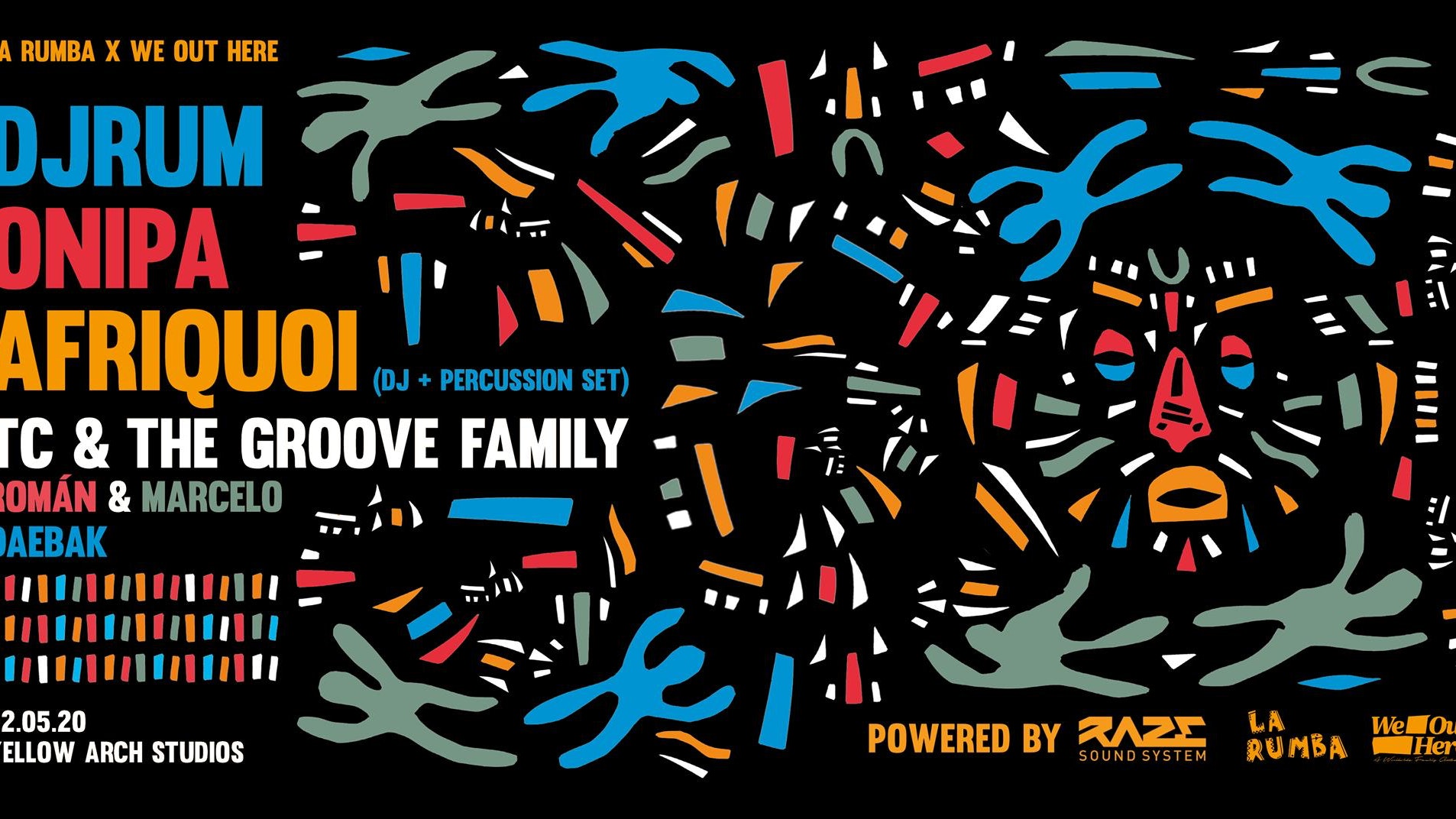 We’re teaming up with We Out Here Festival and Yellow Arch Studios to host a lineup that celebrates diversity in live music, club culture and sound system culture, an ethos held closely by the festival as it approaches its second edition this August. We closed We Out Here last summer for their first edition and are delighted to be returning this year. Make sure you’re with us: bit.ly/WOH_2020

Headlining the warehouse we have Djrum on a 2.5-hour set powered by RAZE Sound System to supply his unique and forward-thinking style of electronic music which blends hard-hitting techno, garage, jungle and drum’n’bass with experimental jazz and classical music. On support we have Daebak from More Pussy 3mpire and La Rumba‘s Román Rocha.

In the main venue we have ONIPA, the brainchild of Sheffield favourites, K.O.G from K.O.G & The Zongo Brigade and Nubiyan Twist‘s Tom Excell, playing live for their debut ‘We No Be Machine’ album launch party. The 4-piece live show is a fresh, raw and fiercely energetic new sound, fusing electronics and deep afro grooves.

Afriquoi return to Sheffield for La Rumba’s second time on a DJ + percussion set with African dance music fusing modern UK electronic with live Gambian kora, creating captivating, beautiful, dancefloor- friendly new music for a new generation of world music fans with one foot in the clubs. With members ranging in age across 3 decades, originating from Africa, the Carribean and the UK, Afriquoi is true fusion music in the best sense of the word, bringing together a vast depth of musical knowledge, culture and life experience.

Opening the venue to start the evening are Leeds locals, TC and The Groove Family, led by Necktr drummer, Tim Cook. Fusing global rhythms, Latin groove and jazz, TC&TG are a fast-rising collective which features musicians from some of the best bands in city’s underground music scene. On support we have La Rumba’s Marcelo Mader to complete the bill.

TC and The Groove Family Live

A Worldwide Family gathering from Gilles Peterson, Worldwide FM and Brownswood Recordings, We Out Here Festival returns this August for their second edition. Joining the musical dots across across soul, jazz, house, electronica, hip-hop and sounds from around the globe, this year’s line up features the likes of Ezra Collective, Underground Resistance, Kenny Dope, Josey Rebelle, Floating Points, Overmono Live, with a focus on both live music and club culture. We Out Here Festival sees integral members of the movement alongside legendary icons, genre-spanning DJs and young improvisers alike for four days of music in one of the UK’s most beautiful, landscaped festival sites.